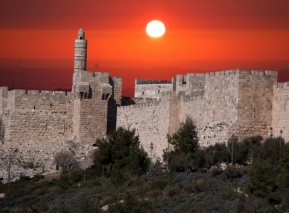 The Tower of David is located at the entrance of Jaffa Gate in Jerusalem’s Old City. The early Byzantine Christians believed that the palace of King David was located here; this reminiscence still preserved in the minaret.

Herod the Great built his palace here. Of his palace remains only a tower dedicated to his brother Phasael remains. The other two towers in honor of his best friend Hippicus and his wife Mariamme were destroyed.