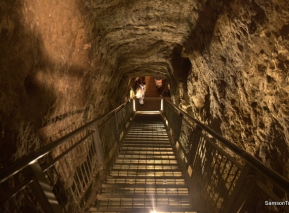 Tel Megiddo (Tell el Mutesellim) is an artificial mound (tel) that sits on the western edge of the Jezreel Valley, approximately 30 km (20 miles) southeast of Haifa and 23 km (18 miles) southeast of Nazareth. Archaeologists have discovered some twenty-six different layers of civilization at the site, with continuous and uninterrupted settlement from the Neolithic period (approximately 7,000 BCE) to the Late Babylonian Period (approximately 586 BCE). Megiddo was both a strategically economic and military site because of its location along the Via Maris, approximately the midway point between the Empires of Ancient Egypt and Mesopotamia. Anyone who had traversed the valley en route to one of the empires almost inevitably stopped at Megiddo’s spring or stayed within its massive city walls for a night’s lodging. Archaeological discoveries at the site give us a wealth of understanding about the transitional period between Canaanite habitation and the Israelite settlement. Megiddo is mentioned specifically some 12 times in the Hebrew Bible. Joshua 17:11 tells us that Megiddo fell into the tribal inheritance of Manasseh. Nonetheless, despite Deborah and Barak’s magnificent defeat of Sisera in the Valley of Armageddon (Jezreel), as reported in Judges 5, the city would remain in Canaanite control until at least the period of Solomon. According to 1 Kings 9:15, Solomon built the wall of Megiddo, and great controversy has existed among scholars whether indeed it dates to the Solomon or to the ensuing period of Omri and Ahab. According to 2 Kings 9, Ahaziah King of Judah was killed at Megiddo and and in 2 Kings 23, Josiah the King was shot with an arrow by Pharaoh Necho in the plain of Megiddo. According to John the Revelator (Revelations 16:16), the final battle will be fought at Armageddon, the Greek rendering of the Hebrew ’Har’, which means ’Mountain’ and ’Megiddo’. Some thought this prophecy was fulfilled when General Edmund Allenby (’Lord of Megiddo’) fought the Turks in a decisive battle at Megiddo in 1918, ending their 400 reign over the region. 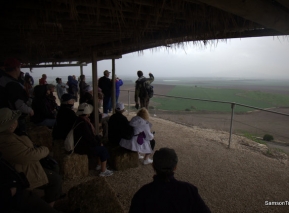 Approximately 34 battles have been fought in the Jezreel Valley (the valley of Armageddon) at the base of Tel Megiddo. Napoleon Bonaparte declared it as "the most natural battleground of the whole earth." Here are some of the most important ones: Thutmose III vs. the Canaanites in ca. 1472 BCE;… 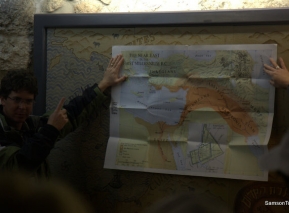 At the Tel Megiddo Visitor’s Center, we use various maps and models to establish Megiddo’s strategic importance along the main trade between the two great superpowers of Egypt and Mesopotamia. This famous route was already galvanized back in ancient times, at least by the Early Bronze… 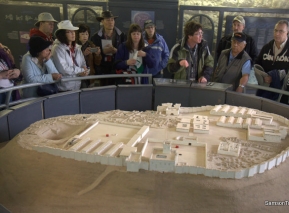 At the Tel Megiddo Visitor’s Center, groups are able to visit an interactive model that displays the many different periods of Megiddo’s… 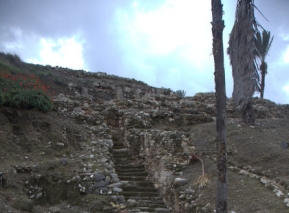 The Israelite Stairwell and Postern Gate at Megiddo

While ascending Tel Megiddo, visitors can see the stairwell and postern gate that served as an alternative entry point into the city during the Iron Age or Israelite period. This access point on the northern end of the mound was likely used by individuals who wanted to enter or exit the city when… 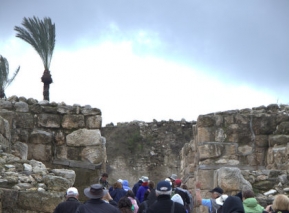 Upon reaching the summit of Tel Megiddo, the visitor is engulfed in time is he or she walks upon the cobbled stones that led up to the Late Bronze Age (approximately 14th century BCE) Canaanite… 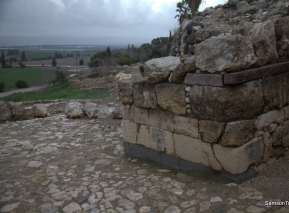 Megiddo’s Late Bronze Age Canaanite city had an impressive gateway. The foundation layer is comprised of basalt (lava rock) stone. The courses above the basalt layer are primarily limestone with a layer of cedar beams. It is believed that the cedar beams provided a certain elasticity to the… 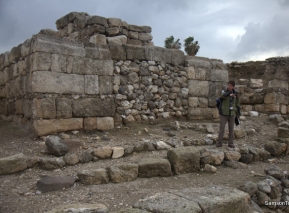 The Six-Chambered Israelite Gate at Megiddo

Shortly after walking through the Canaanite gate, the visitor takes a short flight of steps up to visit the Israelite gate. Interestingly, the Israelites had positioned their gate in the same northernly direction as the Canaanites before them, but was larger and far more impressive. This…