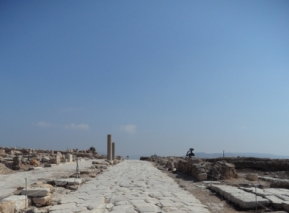 Sepphoris, also known as Zippori or Tsippori (??????)in Hebrew, sits in the lower Galilee region, approximately 289 meters above sea level in a limestone region with Beit Netofa valley to the north, the Nazareth hill range to the south.

In the Babylonian Talmud (Megillah: 6a), we learn the meaning of the word Sephoris : "Why is it called Zippori?" Because it is perched on top of the mountain like a bird."

Sepphoris was conquered by the Roman emperor Pompeii in 63 BCE, and by 55 BCE it was declared to be the capital of the Galilee by Gabinus, then governor over Syria.

When Herod the Great rose to power, the residents of the city were not keen on living under his leadership. According to Josephus Herod attacked the city during a winter snowstorm and the city remained under his control until his death. Upon Herod’s death, the city revolted against the Romans and all of the Jewish inhabitants would be expelled. It would be Herod’s son, Herod Antipas, who would bring the city back to new heights, and it is possibly at this newly planned city that was heavily constructed in Jesus’ teenage years that Joseph served as a carpenter.

Around the time of the Bar Kochba revolt (132-135 CE), the Romans renamed the city Diocaesarea, in honor of Zeus and Caesar. Though Jews had been the minority for hundreds of years, by the late second century CE we find that the Sanhedrin has relocated to this spot under the leadership of Rabbi Judah HaNassi as he and his students are putting the finishing touches on the Mishnah.

By the 4th century CE, the Talmud states that Sepphoris was a city with 18 different synagogues. Sephoris became the home for some of  Judaism's greatest sages: Rabi Halafta, Rabbi Elazar Ben-Azariya, Rabbi Yosef Ben-Halafta and many more.

During the 4th century also, Christianity began to take hold here too. The Emperor Constantine permitted a man named Joseph from Tiberias to build the first church here.

0n July 4, 1187, the Crusaders set out from the springs of Sepphoris  (La Saphorie) to engage with Saladin and his Ayyubid forces in battle at the Horns of Hattin.

An Arab village called Saffuriyyeh would later take hold at the site, rise in prominence under the leadership of Daher el-Omar in the 1700s, but the town’s inhabitants would be expelled from the area on July 15, 1948 in the aftermath of Operation Dekel in Israel’s War for Independence.

Today Moshav Zippori (founded in 1949) surrounds the site and is becoming a popular destination in the north for pastoral B&Bs.

The National Park was officially opened to the public in 1992. Some of the highlights of the site are: 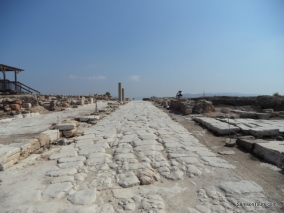 The Cardo at Sephoris

The cardo is the north-south road that runs through the’heart’ of the city. Along the way, you can mosaic floors and etchings (a menorah) that were left by the city’s inhabitants in the 2nd-3rd centuries… 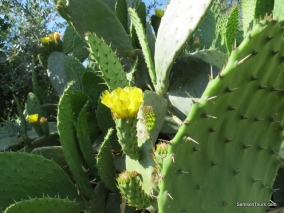 The Prickly Pears at Sephoris

Sephoris has a large plantation of prickly pears or "sabras." It is said that these cacti were brought from the southwestern United States and planted here, as well as in other parts of the country in the late 1700s. For modern Israelis the "sabras" represents the "sabra" - a person who is born in…

The Mona Lisa Mosaic at Sephoris 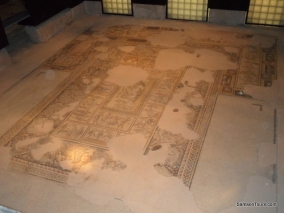 The Roman Villa at Sephoris

This Roman villa dates to the 3rd century CE and was most likely destroyed in the 363 CE earthquake. The house had a courtyard which was surrounded by columns on three sides. The dining hall (triclinium) is the best preserved portion of the villa with its fabulous colorful mosaic floor that depicts… 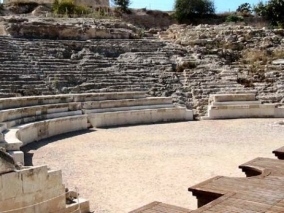 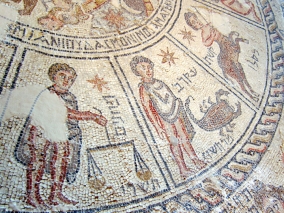 a) Aramaic (the donors)

Remembered for good Yudan son of Isaac and Parigi his daughter Amen.… 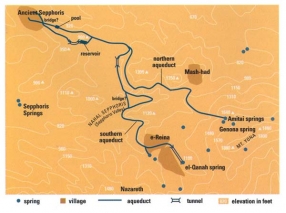 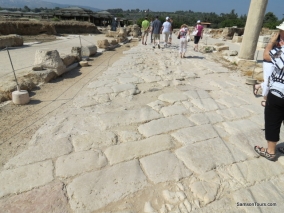 The Decumanus at Sephoris