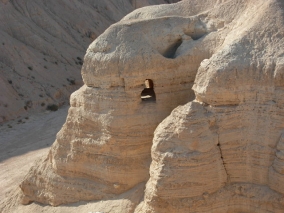 Khirbet Qumran is a city in the Judean Desert believed to have been inhabited by the Essenes, one of the four key sects of Judaism in the first century. Here, eleven caves have been discovered containing the oldest copies of the Hebrew Bible known to date.

In 1947, seven scrolls were discovered in jars. The Bible gives precedence for storing important documents in jars. Jeremiah the prophet wr0te (32:13-14, NKJV):  “Then I charged Baruch before them, saying, 14 ‘Thus says the Lord of hosts, the God of Israel: “Take these deeds, both this purchase deed which is sealed and this deed which is open, and put them in an earthen vessel, that they may last many days.”

We are told that the third century Christian scholar, Origin, also found a jar near Jericho that contained a copy of the book of Psalms, along "with other Hebrew and Greek books."