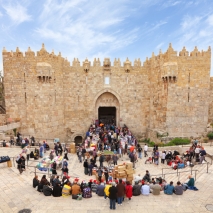 The Damascus Gate is the main northern gate into Jerusalem’s Old City. Tradition holds that the apostle Stephen was stoned here. The gate is known in Hebrew as Sha’ar Shechem because like Damascus it faces towards the city of Shechem. In Arabic, the gate is called Bab al-Amud which means the ’gate of the pillar.’ In the second century CE, the Emporor Hadrian had a statue of himself erected inside the gate on top of a pillar to commemorate his defeat of the Jews and his re-establishment of the city as Aelia Capitolina. It is said that other emporors such as Constantine followed suit, and a pillar can be seen in the famous Madaba Mosaic. 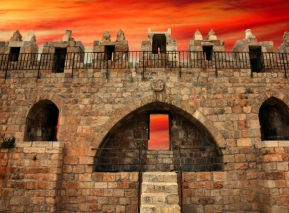 History of the Damascus Gate (2 images)