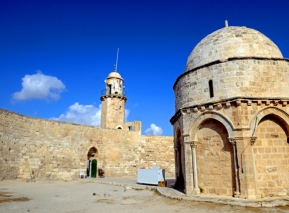 Chapel of the Ascension

The Chapel of the Ascension is located on the Mount of Olives and is believed to be the place where Jesus ascended to heaven after his resurrection. A chapel was first built on this spot by the Emporor Constantine’s mother, Helena, as an open-aired rotunda to commemorate the resurrection. Around 390 CE, a wealthy Roman woman named Poemenia built a Byzantine church on the same spot. In the fifth century, Saint Pelagia lived here as a hermit (a woman disguised as a man). The church was later destroyed in the Persian invasion of 614 CE.

In the center of the chapel there is a stone that is believed to hold the footprint of Jesus.