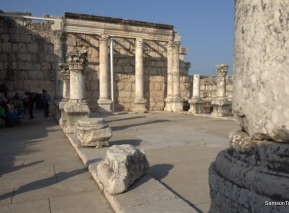 Capernaum is mentioned 16 times in the New Testament, more than any other site in the Galilee. The town is located on what becomes known in later Roman times as the Via Maris and at a border crossing between the Tetrarch of Herod Antipas in the Galilee and his brother Philip in the Golan.

Shortly after Jesus is excommunicated from his hometown of Nazareth, he makes his way to this small fishing village on the northern shore of the Sea of Galilee and makes it "his own town" (Matthew 4:12, 9:1). At Capernaum, Jesus most likely lives with Peter and his brother Andrew in the home of Peter’s mother-in-law. This is alluded to in Matthew 17:24-25 when "the collectors of the two drachma tax come to Peter and ask, why doesn’t your teacher pay the temple tax? ...And when Peter came into the house, Jesus was the first to speak."

While gathering his disciples from the region of Capernaum, Jesus launches his ministry. The town will continue to be the home-base for many of his miracles and the hub from which he can satellite out into the foreign regions, laying the precedence for his disciples to go ’into all the world.’

Capernaum sat on the major crossroads of the Via Maris and the Beth Shean-Damascus Highway. In its height during the Byzantine period, the town was only about 1500 inhabitants, very small in comparison to the towns of Magdala and Tiberias. 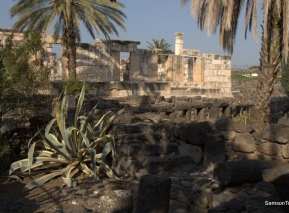 Exploration at Capernaum began already in 1838 by Edward Robinson who described the site as follows:

Capernaum is "desolate and mournful. A few Arabs only of the Semekiyeh were here encamped in tents, and had built up a few hovels among the ruins which they used as magazines." In 1866,… 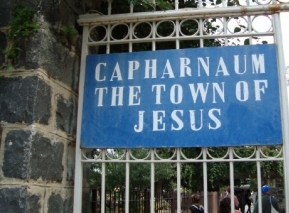 There are many variations to the modern spelling of Capernaum. The word Capernaum actually comes from two Hebrew words: kfar (???), meaning ’village’ and nahum (????), which is the personal name of Nahum, not necessarily the prophet, or may have the connotation of… 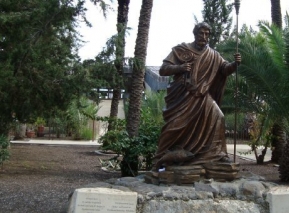 Statue of Saint Peter at Capernaum

Upon entering the archaeology site, one is struck by a large statue of St. Peter. Peter (as well as Andrew, Philip, James & John) was from the town of Bethsaida. He evidently moved to Capernaum after being married, as the New Testament clearly states that he, along with Andrew (and possibly Jesus:… 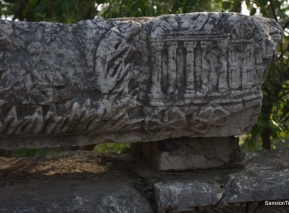 The Ark or Model of Synagogue at Capernaum 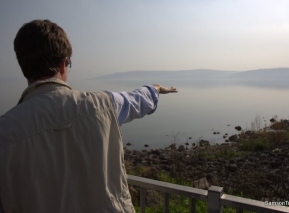 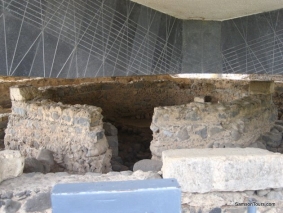 The House of Peter at Capernaum

The House of Peter or the "Insula Sacra" was discovered in 1968. In the late first century CE, a house structure (which was first occupied in Late Hellenistic times) was modified to be come a domus-ecclesia or "house-church." This house had an L-shaped courtyard that was shared by the other… 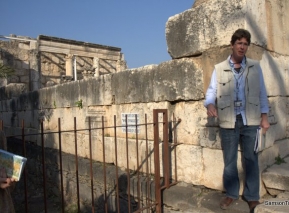 Beneath the limestone foundation of the fourth century synagogue is a basalt stone wall abutted next to a pavement. The basalt pavement and stone wall date to the first century and are believed to be the synagogue of that time. As the excavators pointed out, the wall and pavement area are too… 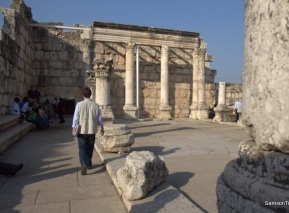 "The centurion heard of Jesus and sent some elders of… 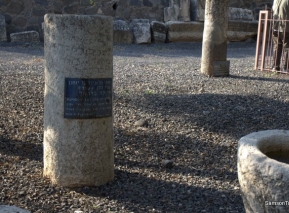 The Zebidah Inscription at Capernaum (2 images)

This inscription can be translated as follows: "Alpheus, the son of Zebidah, the son of John made this column. May it be a blessing for him." Some site the references Alpheus, Zebidah, and John as evidence for the Zebidee family that possibly continued to live in the area of Capernaum for centuries… 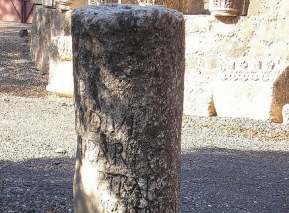 The Roman milestone was discovered in 1975. It’s discovery confirms that site labeled as a ’border-town’ in Mark 2:13-15 sat on the all important road connecting ancient Egypt and Mesopotamia known as the Via Maris. 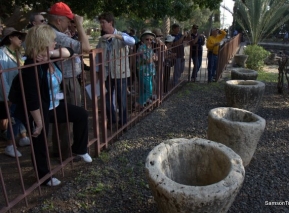 These stone water jars belonged to the 4th century synagogue and were used for ritual purification before entering the synagogue. Their presence reminds us of Jesus’ first miracle in Cana of Galilee when it is says in John 2:6: "Nearby stood six stone water jars, the kind used by the Jews for… 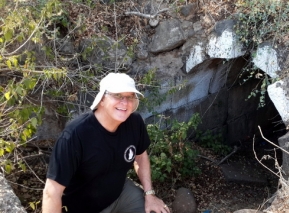 The Tomb of the Centurion at Capernaum (7 images)

Very little is known about this tomb we label ’the Tomb of the Centurion’ at Capernaum. The tomb itself has all the features of classic early-mid Roman-sytle tomb (1st-4th century CE). The tomb is located between the