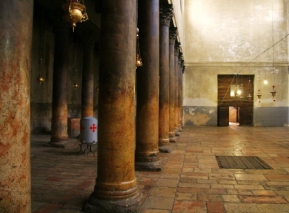 Bethlehem (Hebrew: ??? ???) can be translated literally as the ’house of bread’ or, as some scholars maintain, ’place of war’. The modern city of Bethlehem is located around 5 miles (8 km) south of Jerusalem and has a population of around 30,000 Muslim and Christians. The city is mentioned 52 times throughout the Hebrew Bible and New Testament. In the Hebrew Bible, Bethlehem is best known for being the birthplace of King David. In Bethlehem, David will be anointed by the prophet Samuel (1 Samuel 16:1) and it is from this home city he will go out to fight Goliath in the Valley of Elah and long to drink from the well at the gate of Bethlehem (2 Samuel 23:15), even though the Philistines were stationed there (1 Chronicles 11:16). The matriarch Rachel is buried in Bethlehem (Genesis 35:19) and Elimelech, Naomi and their sons are from Bethlehem (Ruth 1:1), as well as Boaz (Ruth 2:4). The New Testament makes it clear that Jesus was from Bethlehem in Judea (Matthew 2:1, Luke 2:4, John 7:42), though some scholars have recently attempted to declare this a redaction, as there is another city named Bethlehem in the Galilee, approximately 20 miles from Nazareth, which has first century ruins.