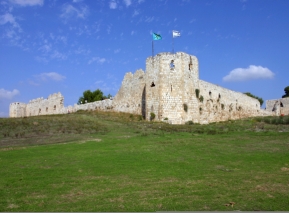 Antipatris or Tel Afek (also written Tel Aphek) is an ancient site that protects the source springs of the Yarkon River. Afek is one of the most important and strategic military bases in the biblical period. The tel is approximately 120 dunams in size. The site is first mentioned in the Egyptian Execration Texts in the early 2nd millennium BCE. It is listed as a conquered city in the 15th century BCE conquests of Thutomse III and Amenhotep II. There are other ancient sites also known as Afek, and so ancient writers often defined this site as Afek of Sharon, meaning Afek which sits in the plain of Sharon. Reference to the site in Joshua 12:18 seems to confirm this very point. In the 11th century BCE the Philistines use Afek as their base camp for two very important battles against the Israelites (1 Samuel 4:1, 1 Samuel 29:1). Afek is also remembered in recordes of Esarhaddon, king of Assyria in 671 BCE, and Nebuchadnezzar, king of Babylon in 600 BCE. In the Hellenistic period, Afek became known by the Greeks as Pegae, which means "springs." This is how it was referred to in the Ptolemaic and Hasmonean periods. The glory days of Afek, however, arrive in around 9 BCE when Herod renames the city in honor of his father, Antipater II. It is to this city the apostle Paul was brought in the book of Acts 23:32-33 when in transit to Caesarea Maritima. The walls of the city seen today are from the Ottoman period called Pinar Bashi which was built between 1572-1574). 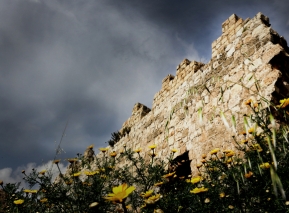 The Fortress of Antipatris (2 images) 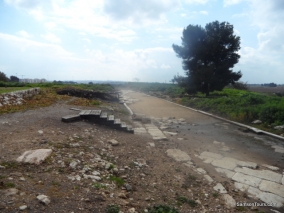 Looking South on the Cardo at Antipatris